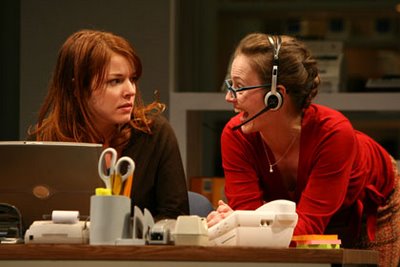 (Aubrey Dollar and Colleen Werthmann in Yale Rep's The Mistakes Madeline Made.)
Theater editor David Cote wraps up a year of theater for TimeOut New York with a list of the Best (And Worst) of 2006. Among those plays included on the Best List is the new Elizabeth Meriwether dark comedy The Mistakes Madeline Made, which debuted at the Culture Project last April. Directed by Evan Cabnet, Mistakes starred Laure Heisler as Edna, an office drone who develops a fear of bathing after her brother (Thomas Sadowski) dies in the Middle East. The play also starred Colleen Werthmann, Ian Brennan, and Brian Henderson. Mistakes joins Grey Gardens, The Pain and the Itch, Stuff Happens and The History Boys as some of Cote's favorite shows of 2006.

Mistakes was later produced by Yale Rep, where it was directed by Mark Rucker, and where Werthmann reprised her role as the anal-retentive Beth opposite Aubrey Dollar's Edna. The Mistakes Madeline Made is available from Dramatist Play Service here.
Posted by Kevin Christopher Snipes at 11:16 AM No comments: 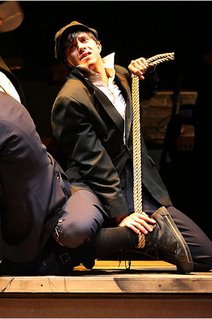 YOUNGBLOOD CONNECTION: One of Glick's earliest New York appearances was in Daria Polatin’s one-act “D.C.” “D.C.” was part of Thicker Than Water 2004 at Ensemble Studio Theatre. Glick played a young Spelling Bee contender who gets a sad dose of R-E-A-L-I-T-Y.

WHERE HE IS NOW: Glick recently made his Broadway debut at the Eugene O'Neill Theatre in Duncan Sheik & Steven Sater's Spring Awakening. Glick plays the nebbish Ernst, who eagerly allows himself to be seduced by blonde bad boy Hanschen (Jonathan B. Wright).
Posted by Kevin Christopher Snipes at 11:28 PM No comments: 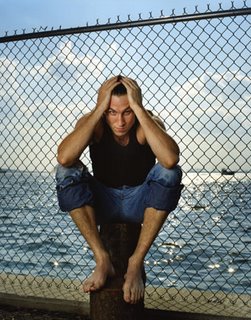 The cast has been announced for Youngblood alumnus Christopher Shinn's two-character play Dying City. Rebecca Brooksher and Pablo Schreiber will star in the American premiere, which opens March 4th at Lincoln Center's Mitzi E. Newhouse Theater. Brooksher will play a therapist whose husband has died in Iraq. Schreiber (pictured) stars as her husband's twin, who is searching for answers about his brother's death. Schreiber recently received a Tony nomination for his Broadway debut last season in Clifford Odet's Awake and Sing! His Off-Broadway credits include Mr. Marmalade, Manuscript, Sin and Julius Caesar. His film credits include The Lords of Dogtown, The Manchurian Candidate, and The Mudge Boy. Brooksher is making her Off-Broadway debut. Dying City will be directed by James MacDonald, who directed the play's London premier.
Posted by Kevin Christopher Snipes at 9:21 PM No comments: 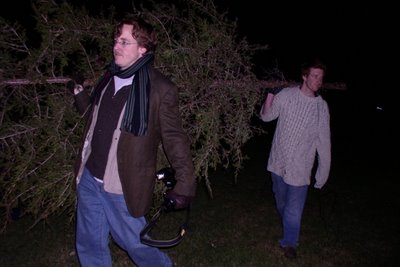 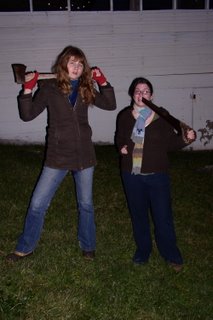 The old Jew displayed the silver pens as if they were his children." * first night of Chankuah * Annie's failed attempt to buy Emily's sweater * hot apple cider * Secret Santa * gay porn * The Wiz * a decapitated Indian with cactus testicles * Steven Segal's autograph * $10 from Sam * Schatz-Baker... someday. * taxi menorah * "Shut the door." * "Your quim is a tourist attraction." * Veggie chili & cornbread * Sendrow's Chanukah sing-along * "I wonder what Graeme is wearing right now?" * the needless murder of a pine tree * Emo-showtunes * the color of shit * "The Tour had begun." * egg nog * "Kevin, please don't let your last words be 'RJ!'" * The Philadelphia Druggist * "And I am telling you, I'm not going!" * Tumbo
Posted by Kevin Christopher Snipes at 3:14 PM No comments:

December 15, 2006. The playwrights of Youngblood gathered at Lexington for their annual winter retreat in the Catskills. As dusk approached the quiet cabin in the hills, an ax-wielding Annie Baker and a perhaps-too-naive Graeme Gillis headed into the darkening forest to bring back a Christmas tree in preparation of the holidays. Little did the soused but generally sexy members of Youngblood know, it would be the last time they saw their red-headed Canadian leader.

Shortly after midnight Baker was found in the outdoor bathtub. Rocking back and forth like a retarded epileptic, and scrubbing herself with nettles, Baker muttered over and over, "Out damn spot. Out!" Mike Lew quickly (perhaps too quickly?) escorted Baker away from the baffled writers. Whispering into her ear, Lew reassured the catatonic Baker, "It's okay, it's okay. It was him or us."

The next day, with Gillis still missing, Youngblood sat down to lunch. Mike Lew made dumplings. Delious dumplings. In fact, no one in Youngblood had ever tasted such savory and succulent dumplings. Unable to exactly pinpoint the flavor, Matt Schatz asked Lew what he had stuffed the dumplings with. Lew answered simply and with a sad smile, "Canadian bacon."
Posted by Kevin Christopher Snipes at 8:19 PM No comments: 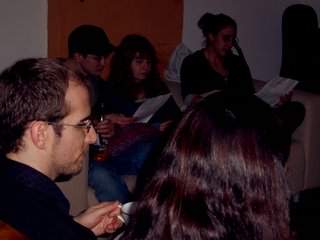 We went on retreat.
It turned out real sweet.
The food made was passing
and the passes made discreet.

We cut down a tree
(with no thanks to Qui).
If Graeme's sweater got brambles,
then why's the brambles in me?

We read lots of drama.
Opined 'bout Obama.
And drank enough nog
to bring shame to our mamas.

Youngblood Winter Retreat!
Thirteen scribes, one director.
We missed the alums, the abroad, the defector.


Qui... Qui Nguyen was the defector. Thanks for nothing on helping us cut down that tree, QUI. 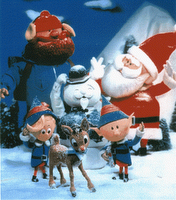 It’s the holiday season – the time of year when we all create Amazon.com wish lists so our friends know exactly what to get us so we don’t have the same fiasco we had last year when we opened up a bunch of crap and had to pretend we liked it (No, REALLY, it’s just what I wanted… Is there a gift receipt?). Now three of Youngblood’s most festive members take time away from their busy schedules of downing eggnog and standing under the mistletoe in the hopes of getting their first kiss to answer these very probing questions about the holiday season.

1. Naughty or nice?
Naugh-Nice. A little bit of naughty spiked with nice

2. What was the best Christmas present you ever received?
A drum set when I was 9. It belonged to my Uncle, and I thought that made it cooler.

3. What would you like for Christmas this year if you could get anything in the world?
A little house on a lake in the middle of nowhere.

5. Most annoying holiday song?
Is there such a thing?

6. Favorite holiday movie/play/book or other piece of writing?
Christmas Vacation...the monologue where Chevy Chase is yelling about the Christmas Bonus. Oh god, genius.

1. Naughty or nice?
I'm answering these questions for you; I must be very nice.

2. What was the best Christmas present you ever received?
Amadeus, the director's cut DVD for Christmas of 2003. Though I prefer the previous non-director's cut version, there was no way you could've known that when you bought it for me, Kevin.

3. What would you like for Christmas this year if you could get anything in the world?
I'm the luckiest boy in the world. Maybe a sweater. And a French dip.

4. Favorite holiday song?
“Fairytale of New York.” Also my sister Lisa M. Schatz and I used to always sing "Let It Snow" when I was 12 and she was 17.

5. Most annoying holiday song?
The inauthentic Hanukkah songs we were made to sing in grade school chorus were pretty annoying. We also had to sing Whitney Houston's "I Wanna Dance with Somebody (Who Loves Me)" but for reasons unknown we had to substitute the lyric "I wanna feel the heat with somebody" with "I wanna feel the beat with somebody" But I don't think that's a Christmas song, really.

6. Favorite holiday movie/play/book or other piece of writing?
I don't know. Something British. Is Equus a Christmas play? I cried at Miracle On 34th Street the other night, but I have a lot of problems.

7. Santa vs. Frosty?
Who fucking cares? 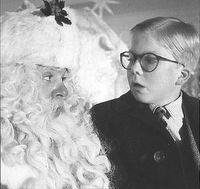 1. Naughty or nice?
Nicety. (There's a whole song about being Nicety from the 80s; I'm considering bringing it back.)

2. What was the best Christmas present you ever received?
When I was ten I received the complete set of the Sweet Valley High and The Babysitters' Club books along with a brand new journal. I couldn't believe my luck.

3. What would you like for Christmas this year if you could get anything in the world?
Rollerskates. And world peace. In reverse order.

5. Most annoying holiday song?
“Grandma Got Run Over By A Reindeer.”

6. Favorite holiday movie/play/book or other piece of writing?
A Christmas Story. It's not Christmas with out the ACS marathon on TBS.

7. Santa vs. Frosty?
Santa, obviously. Frosty doesn't have any useful magical powers, no posse of reindeer, no sleigh for a quick getaway and, quite frankly, there's nothing you can really do when you have branches for hands.
Posted by Kevin Christopher Snipes at 7:57 PM No comments: 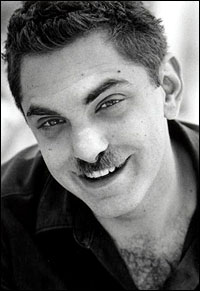 WHO: Christopher Shinn
PLAYS: Four, Where Do We Live, What Didn’t Happen, The Coming World.
WHAT HE’S UP TO: Shinn will receive his biggest New York production to date when his new play Dying City opens at the Mitzi E. Newhouse Theater at Lincoln Center on February 26. Dying City tells the story of a young therapist whose husband dies while on military duty in Iraq. A year later, his identical twin brother arrives unexpectedly at her door, seeking solace—and answers to the mystery of his brother’s death. Elsewhere, Shinn’s one-act Four is being turned into a film by director Joshua Sanchez. For more about Christopher Shinn, check out his website here.
Posted by Kevin Christopher Snipes at 7:32 PM No comments:

WHO: Edward Lee Murray
MEMBER: 2004-2006
WHAT HE'S UP TO: Now pursuing stand-up comedy, Ed recently won Sal’s Comedy Hole’s Laugh Off 2006, earning the grand prize of $10,000 (so, yeah, now would be a really good time to mug him). Ed’s plays with Youngblood include “The Never-Ending Adventures of Beautiful Boy and Precious Girl, Vol. 12” and “The Powerful Girls.” For more about Ed, check out his wit and writing (which are not mutually exclusive) here.
Posted by Kevin Christopher Snipes at 10:58 AM No comments: