Application requirements for the 2009-2010 season are now up on the Youngblood Website. Deadline is August 15, 2009, but applicants are encouraged to submit early, since early applications will be read before we're snowed under with scripts.

This looks to be an even more competitive year than usual, as we have only one or two spaces available and our applications have been steadily increasing (last year was well over 100). But then again, several current members applied more than once before they got in - so even in a tough year it's worth applying. All materials will be read by both me and Graeme, and we'll let everyone know their preliminary status by mid-September, hopefully.
Posted by RJ at 1:26 PM No comments: 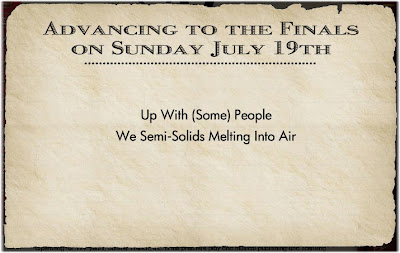 Major congratulations to Conkel and Kern for sweeping their bracket at the Sam French! Both shows will be performed again in the finals, to compete for publication and licensing by Sam French.

Big congratulations, too, to the other five shows in last evening's first round - in general they were deeply interesting, thought-provoking and well-performed pieces, and the judging could have gone many different ways.

And of course thanks to the directors and casts: Jaime, Kel, Rob, Theresa, Jim, Tommy, Jay and Marguerite - you guys kick ass.

UPDATE: It looks like we used up all our chi getting into the finals - neither of our finalists made it all the way to publication. Still - congrats to all and big thanks to the actors. And huge congratulations to the 6 winners.
Posted by RJ at 1:54 PM No comments:

Joshua Conkel & Jon Kern both have pieces in the Samuel French Off Off Broadway Short Play Festival: both plays were orginally produced by Youngblood and both plays are being performed TONIGHT (Tuesday July 14)!

At 7:30:
UP WITH (SOME) PEOPLE
by Joshua Conkel
directed by Jamie Richards
featuring Robert Askins & Theresa Stephenson

Buy tickets here. (Apparently, those who purchase tickets for the 7:30 PM can also see the 9 PM show on a standby basis.)

The Samuel French Off Off Broadway Festival a great blog in which they've interviewed each playwright in the festival...
Click here for more information on Josh Conkel's UP WITH (SOME) PEOPLE (orginally produced in YB's Asking for Trouble).
Click here for more information on Jon Kern's WE SEMI-SOLIDS MELT INTO AIR (originally produced in YB's March Financial Crisis Brunch).

Below is a post Mira wrote last week regarding her experience working on NICO with WTF:

Being here at the WTF developing this new comedy with director Kate Pines has been one of the most exciting projects I have had as an emerging playwright. I met Kate back in April through another director we both know, and like a great first date the chemistry was there. We decided to move forward with the possibility of working together at WTF, based on my interest not to develop or improve a play I already had, but to write a brand new play. I really wanted to write a play based on a side character named Nico that appears in another play of mine. However, as I drafted and redrafted NICO throughout the month of May, I found that the Nico in NICO was becoming a brand new Nico, a Nico to rival all Nico’s. A Nico to be remembered. I arrived here at Williams College last Sunday, and over the course of the past week the play has evolved to such heights of hilarity that, as one of my actors put it while laughing through the script, “stop stop, I’m gonna throw up”. We are having way too much fun. The process that Kate and I have honed in on and have been rolling with, is that we have rehearsal in the evening, then she and I meet briefly after to discuss what’s going on in the script and areas that I want to or should take a look at for revisions or rewrites. The next day, I have all day to address whatever we discussed and agreed on, and in the late afternoon I email Kate the new pages which we then see and hear that evening in rehearsal. It’s a totally incredible developmental process that is at times very scary and at times incredibly rewarding. Last night I had one of the most rewarding moments here. While Kate was trying to block a fight scene with a lot of movement, one of the actors suggested, “If I leap onto this storage bin I can jump into Nico’s arms as I try to strangle Nicole from across the table”. It was exactly what the scene needed. I’ve been here a week and we’ve basically locked in the script, which is very exciting and we both really worked to get to where we are in the script now. I will be here for a few more rehearsals and then Kate and the cast will rehearse rehearse rehearse until the performance on July 22nd.
Posted by Kel Haney at 10:42 PM No comments: 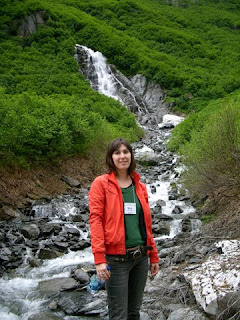 I am suspicious of any place as beautiful as Valdez, Alaska. The mountains, the Sound, the dusty daylight twenty-three hours a day… quite frankly, I don’t trust it, but my fear of it’s beauty was never confirmed with the disaster I imagined would have to take place. The conference was a wonderful experience. The week was structured with play readings in the morning, afternoon, and late afternoon in three different spaces, and always one performance on the main stage theater at night. There’s something assaultive about seeing five play readings a day, but the benefit for me was that with each reading I could grasp more and more clearly the things about story telling that I like, and it helped me clarify for myself what I think is good vs. bad story telling. Each reading was run by a panel of three theater artists, whether they be playwrights, dramaturges, or directors, and after the reading the panel gave feedback to the playwright followed by audience feedback. In a bizarre twist of fate, I often disagreed with the panelist and fantasized about sharing my thoughts with the room, which I would never do because the idea of talking in front of a large crowd makes me want to puke. Between gleaning good story telling from the readings and disagreeing with the panelists, I began to formulate some solid opinions about playwriting, which I would guess I’ve always had, but never put them all onto one list. I’m not going to note those here in this blog, but ask me about it if you’re curious. My reading, of my one act play The Red White and Blue Process went “ 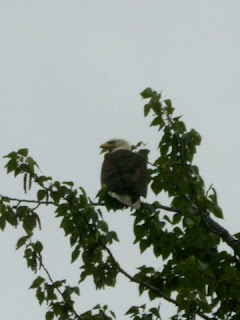 well”. This play was my January brunch play, which I thought has potential to be developed into a full length play. I say it went “well” because there was one director on my panel (who was either asleep at the wheel or just straight up fucking with me) who kept circling around my character “Nicorette” and how clever my character names were. (Um… her name is Nikoletta and I did not mean her as a metaphor for how jumpy nicotine can make a person and why are you still talking? And um… my other character’s name is Ammonia on purpose as in the chemical and not as in the latin word for “harmony” and why are you still talking?) As a result of my reading and my one-on-one feedback with Kia Corthron who was on my panel and gave excellent feedback, I have the foundation of an idea upon which to build this play. I felt my experience there was fulfilling. So if the conference wasn’t a disaster and the landscape wasn’t a disaster, where was the disaster I was waiting for? It’s not in the “being there”, but “getting there”. Holy God why does it take forty-eight hours to get to Valdez?