I used to love MTV Cribs. Remember that episode with Moby? That apartment was SO Moby! Or how about Hanson? Man, that house was big. Or how about that one with John Guare??

I know I would watch a playwright edition of MTV Cribs. I'd love to see what Sam Shepard keeps in his fridge or what sort of ride Lynn Nottage wheels around in. But what do I want to see most of all? I want to see where the magic happens.

Where do they write their plays??

How big is their desk? What else is on that desk? Is it near a window? What sort of lamp?

Let me start this trend. I'll show you where I write my plays and you can tell me where you write yours. I write my plays in the far corner of my bedroom at a small little desk with just enough room for my laptop, a book, and a few piles of laundry. Sometimes I look at this brick wall....sometimes I look out my window where I have an excellent view of another brick wall.

I dream of going to coffee shops to write, but somehow it never works out. I'd love to go a park or something, but I burn too easily to be outdoors for long. More often than not, I write my plays amid laundry, cat, and brick. It looks like this: 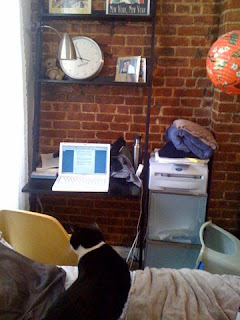 Where do you write your plays?
Posted by Patrick Link at 4:10 PM 2 comments:

Hey. Who named the theaters at theater row?
What's with that? The Clurman, the Beckett, the Lion, and the Acorn.
Who was like, "We need theaters named after a famous American director, a beloved existential playwright, a jungle beast, and a nut. Also we'll build a bar in the middle of the building. A bar where we'll whisper to everyone to be quiet because there's a show going on."
Posted by MisterMichaelLew at 7:18 PM 1 comment:

Song for a Future Generation 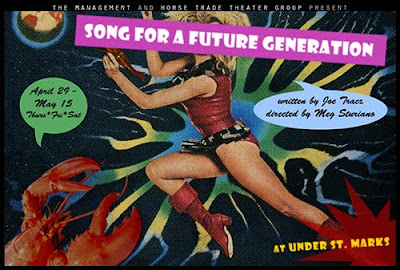 Hi. I'm Josh and I am a Capricorn.
I love feminist punk rock and soap operas from decades past.
That's how my part goes in my fantasy life where I'm a member of the B-52s and get to have my own introduction line in "Song for a Future Generation." I'm not in the B-52s though, so my favorite introduction remains Cindy's:

Hello, I'm Cindy! I'm a Pisces.
I like chihuahuas and Chinese noodles!
I love this song so much I'm producing a play inspired by it with my theater company, The Management. Okay, not really. I mean, I'm producing the play, but only because Joe Tracz's SONG FOR A FUTURE GENERATION is so disarmingly charming and fun that I couldn't resist it.

SONG FOR A FUTURE GENERATION is like a sci-fi teen movie made in the 1980's; it's the future as seen from the past. The story revolves around three clones who travel the galaxy throwing theme parties. They are putting on their biggest bash ever... a party on a satellite orbiting a star that's going to blow up. Among the guests are a time traveler, two jock offs about to go into flight academy, a pair of rival girl bounty hunters, a depressed psychic, a juvenile delinquent and his strange, bee hived lady friend. As they search for meaning and connection they totally end up having the BEST NIGHT EVER.

The play has multiple choreographed dance numbers and lots of cool music. You'll like it if you aren't boring or stupid, I promise. I also designed the costumes, something I've never done before but have enjoyed immensely.

I'm so, so proud of this show and I think that Joe Tracz is one of the most exciting young playwrights there is on the scene. (Plus, he's cute!) So come on down to the East Village and support indie theater. To quote the B-52's: "Let's meet and have a baby now."

Hello America (and Chinese hackers), long time no blog.
Story time...
So part of Youngblood's activity is meeting on a weekly basis to read excerpts from works-in-progress. For instance an act of a new play. Or a 150 page full-length play. Or two 150 page full-length plays. Or a couple of brunch scripts.
Everybody signs up a few weeks in advance and it generally works out ok. But sometimes NOBODY has any pages to bring because NOBODY's been working on sh*t. And when that happens rather than go home emptyhanded we decided to do our favorite thing in the world which is sit around complaining about the state of theatre.
And when we got tired of that we decided to come up with ways to make Youngblood better. One of the things we came up with was having more regular blog posts, by having weekly assignments where at least one member posts for the week. I got the first assignment because I bought it up.
Let's see if this whole "getting regular" thing sticks like a New Year's hangover or falls away like a New Year's resolution.
-ML
Posted by MisterMichaelLew at 6:16 PM 2 comments: