The Final Chapter - a short story - in which the 13-year-old me imagines what it will be like to be the 17-year-old me.

I found my junior high diary. 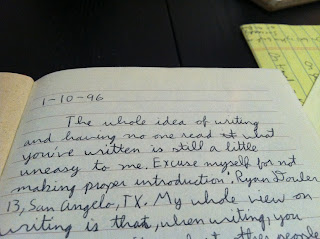 The dim porch light seems to dare me as it flickers in the moonlight. I look at your legs, then to your side, removing the hair from my eyes. I glance at your eyes, looking back at me, and then at your red lips. Your bottom lip presses against your top lip. Just then you grab my left hand gently, holding it firmly. I advance, gently touching your lower back, as I kiss you slowly.

The porch light goes out but I don’t notice, and you don’t either. I know you don’t. For that moment, that kiss, you become a part of me.

Just then your brother pulls up in his red 1978 Chevy Convertible. We both pull away as he slams his keys down on the dash. You whisper, “goodnight,” with a smile as I walk away. I tip my derby-style hat at your brother. He naturally flips me off. I can distinctly smell a mixture of strong perfume and liquor on him. I make no response. I don’t know why he despises me so much; maybe it’s because he’s 18 and I’m 17 or maybe it’s just because I’m in love with his younger sister. I don’t really know; nor do I care.

I look forward trying to seem cool as I walk down the long driveway to my car. I step into a foot deep puddle of mud, water and probably used motor oil.

“Dammit, my good black loafers,” I think to myself. “Oh my God, my khakis are soaked to my knee.”

I step into my car pretending not to notice.

The author attempts to attract girls in his best outfit: 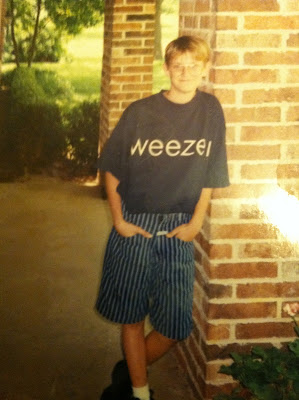 Posted by Ryan Dowler at 3:00 PM No comments:

I have been to playwriting utopia and it is The Kennedy Center! The things I was given include train rides (a business class seat), a hotel suite with two TVs and a writing desk overlooking a quaint street, free delicious lunch in a beautiful cafeteria, per diem, an incredible cast to develop, workshop and present my play GOOD DANCER, a dedicated and giving director,  a dramaturg, artistic support, and my name was spelled correctly wherever it appeared! I was given all these things thanks to the genius and brave leadership of Gregg Mozgala and the company he started, The Apothetae - a new theatre company devoted to the disabled experience http://www.theapothetae.org/.  Gregg commissioned me and three other talented and kind playwrights and bothered to have us all develop our work at The Kennedy Center over Labor Day Weekend. But I will not use this entire blog to brag and say how great everything was. Instead I will mention something outside The Kennedy Center that should be mentioned this week in particular.

On the first day there, after hearing another playwright have his play read, I felt a little like my play stunk and that I stunk and that I would always stink. So I took a walk. I exited through the back of The Kennedy Center and found a fountain. And there were some nice trees. And then I noticed some tourists walking behind me and then I looked up and saw that there were quotes carved into the stone walls of the building. These were all quotes from JFK and they were all about the necessity of the arts to our nation. 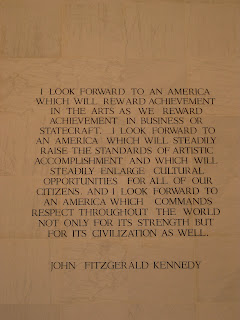 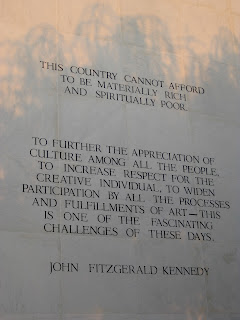 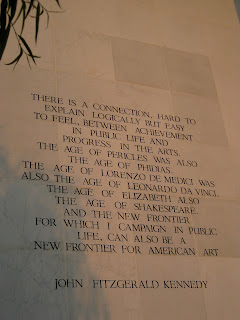 I was surprised to find that a President was campaigning for art as an enrichment of our civilization. I don't know where on JFK's priority list the arts fell, but the fact that he said this, it was etched in stone, and the building supports artists of all types in various stages of their work seems like his words had some impact. It is difficult to tell a politician why new plays should matter, but as JFK says, it is"easy to feel."  New plays should not be funded instead of Medicare nor should peaceful relations with other countries be put second to bringing plays to the world. But I would like to hope that while we still have a great man in office and God willing will have him for four more years, that the arts will re-emerge as a priority because they make us all as people feel richer. And while I'm mentioning specific areas of the country, since one building in Washington D.C. can make  playwrights feel worthwhile, hopefully one Mayor of New York City can fund a city's worth of art because it not only feels like a good idea, but because the city and its people would be as JFK said "spiritually poor" without it. Thanks for your good work JFK, and Ted Kennedy. Looking forward to more progress for and through new plays.
Posted by Emily Chadick Weiss at 9:06 PM 1 comment: