Behind the Scenes: Eric March

Newly minted YBer Eric March debuts a new song on the piano of the future: a roll-up. 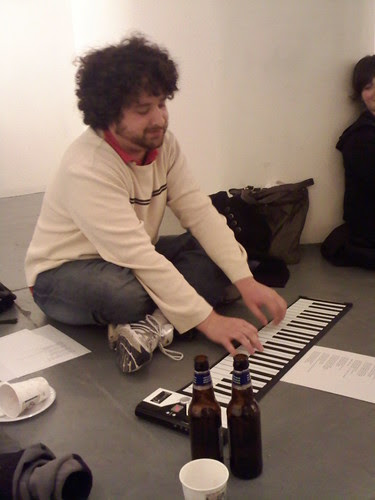 Behind the Scenes: This is How We Roll

Two days ago, Youngblood co-director Graeme Gillis sent a massive update email to the creative team of ASKING FOR TROUBLE 2009. In a rare peek behind the curtain, here it is in its entirety.

Good Morning Youngblood Nation,
By the time you get this the sun will have risen on the first day of tech for Asking For Trouble. For now though it's two in the morning and RJ and I are at EST, bombed on Hawaiian Punch and vodka (what are you laughing at? They were the only drinks we could find in the WHOLE THEATRE), and still, even now, still fighting about the running order. If you ever wondered how decisions got made at Youngblood, you're seeing how it works. Graeme and RJ drink a bunch of girl drinks and then they Hawaiian Punch It Out.
We'll get to the running order in a minute (editor's note: at 9am, Graeme called RJ to change the order again), but first, here's some information it would probably help to have:
1. Set Changes: There was a time when all the set changes in Asking For Trouble were done by the playwrights. It was awfully fun to watch, but it involved a set change rehearsal that would run till 230 in the morning and usually added about 20 minutes to the running time of the show. Finally after one year where a guy dragged a chair onstage and stood in the blue light for a solid 150 seconds trying to figure out where the chair was supposed to go (that guy may have been me), we decided we should simplify things.

This year, the casts for each play bring on their set at the top of their play and take it off when they're done.

All the stock set pieces will have specific places to live offstage, which you will see at your tech. During tech, our stage manager Michal and our intern Olga will note which pieces each play is using, and will let you know if you can leave anything onstage for the next show, but for now please plan to strike everything you use until further notice.

So, in a nutshell: actors will be placing and striking set pieces, stored upstage & backstage.

2. E-Flyer/Facebook Invitations: We've sent out an e-flyer to the Youngblood and EST mailing lists, which you all should have received. If you didn't, reply as such to this email and we'll get it to you. Check out the terrific comics, drawn for us for the second year running by Youngblood's own Nikole Beckwith. My favorite is the salmon hat.

Feel free to invite your friends via that event as well.

3. Reservations: To reserve seats, tell your friends, your family, your lovers, and your family's lovers to call 212.247.4982, x105. They need to say which night *and which series* they need tickets for, and leave their email address.

Or they can send that information via email to boxoffice@ensemblestudiotheatre.org

Remember, there are about 114 people taking part in this thing one way or another. That means people need to reserve early. It'll fill up fast, especially for the later shows. The last thing we want is to turn your family's lovers away.
4. Call Time. For the first performance, we'd like to ask everybody to show up half an hour before curtain. So if you're in the Series A at 7pm, be at EST by 630. If you're in Series B at 9pm series, be here by 830.

For Friday and Saturday we can fudge the call times a bit, so if you don't go onstage till 1030 we're not gonna make you show up two hours early every night. But if everybody can get there early the first night, it'll help keep things running smoothly.
5. Curtain Call. If you're a fan of four-hour evenings of ten-minute plays, like we are, then you know that individual curtain calls for each of your 21 plays can get a little impractical. So we ask everyone to stick around till the end of their series and we do a great big company bow at the end.

There are always cases where people have to take off beforehand, and we understand that - just let us know and it's no sweat. But I will say that a big part of the fun of these things happens backstage, meeting and hanging out with the 72 other people who got roped into this. And at the end of the night when everybody piles onto the stage and the audience is hooting and applauding because they can't quite believe they made it through either, it's a pretty great sight to see everyone onstage together, it's a pretty great feeling. It's like you're in Live Aid or Miss Saigon. So stick around if you can. It's really worth it.
6. Opening Night. Are you like me? Do you know your lines yet? You got any idea where you're supposed to stand when you don't have lines? Are you getting a little freaked? Have you looked in the fresh, in-some-cases-peach-fuzzy face of your playwright and thought to yourself "As God as my witness, I will not let this peach-fuzzy playwright down"? And what are we all going to WEAR?

Well if the answer to any of those questions is Gee Graeme I Dunno, then the good news that pretty much all of the roughly 114 people that are doing this are going through the same damn thing. You know what helps?

Well let me tell you what doesn't help: staying at EST and drinking Hawaiian Punch cocktails and fighting with RJ till two in the morning. No, what helps is sitting in the audience on Thursday night to watch each other's shows. It gives everybody a warm, friendly audience for that first bold leap into the breach, it lets you know that everyone is in more or less the same spot as you, and when you see the plays actually pulled off, it's proof that such miracles can happen. Ah, Youngblood. A Pocketful of Ten Minute Miracles.

And, of course, we're gonna let you in free. It goes back to the fun of being in this thing; for five more days we're all part of this lurching, unwieldly, roughly-114 person company. How often do we get to do shit like that?
7. Nate Whelden. So there's this guy Nate Whelden. So Nate lives in Baltimore, but I didn't know that, see, and last night when one of the plays lost an actor, I called Nate. And at the time of this writing Nate Whelden is TAKING A BUS FROM BALTIMORE TO NEW YORK, where he will SLEEP ON A BUDDY'S COUCH FOR A WEEK, so he can do Asking For Trouble. Even if you kinda don't have time to watch the other shows, even if you've discovered that it turns out you sort of don't like ten-minute plays, even if you hate everybody else that you've met and worked with this week, come on out and cheer Nate on.

8. Parties. We're gonna have some parties. The Mighty Kel Haney managed to hook us up (again) with a big donation of Stella Artois. It turns out that Youngblood's big in Belgium. Who knew? Our friends the Belgians. So yeah, we're gonna have some parties after the performances. There will be an opening night party on Thursday, a closing night party on Saturday, and a party on Friday night just so Friday night doesn't feel left out.

9. What was I talking about? Oh right! Whew! Here it is! With all that as your drumroll, then, here is your RUNNING ORDER for ASKING FOR TROUBLE 2009:
SERIES A

BACK TO THE SEXY by Mira Gibson, directed by Snehal Desai
with Steven Boyer, David Hurwitz, and Allyson Morgan
IF YOU by Lucy Boyle, directed by Jamie Richards
with Robert Askins, Jenny Gomez, and Susan Willerman

All right, Troublemakers. As they say in Nova Scotia, see you on the ice.
Here we go.
Graeme
Posted by RJ at 12:08 PM No comments: