In Memory of Philip Seymour Hoffman 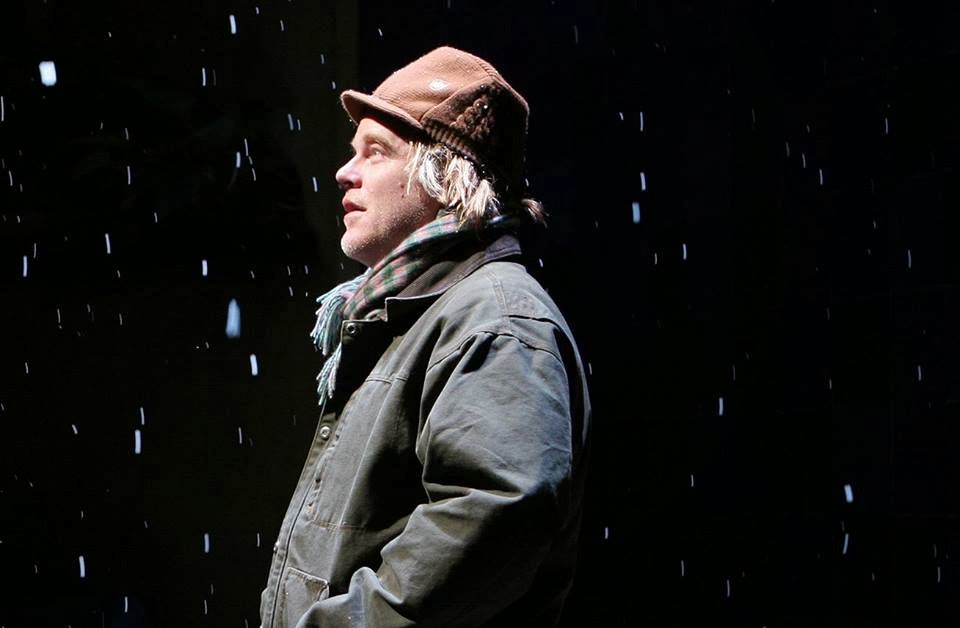 When I think of him, this is the image that comes to mind.  It's from the play Jack Goes Boating, and it hangs like a championship banner in the Labyrinth Theater Company offices, where I worked for the better part of five years.

I met him on my first day.  He was rehearsing that misunderstood Peter Sellars production of Othello at the company's old offices on 38th Street, and I was a lowly intern trying not to get in the way.  On a break, he came through the office to go have a cigarette in the conference room, and I was introduced.  He grumbled 'hey, how you doing,' and I tried to act cool.  That was that.

The last time I saw him was in May at the Knickerbocker Bar & Grill for the Opening Night party of A Family For All Occasions, the last play he directed at Labyrinth.  He sidled up next to me at the bar, put his thick hand on my back, and said 'hey, how you doing.'  I said 'good' and congratulated him on the show.  He deflected a 'thanks, thanks,' and I received my two Manhattans from the bartender.  He ordered a cranberry and soda.  That was that.

Over the course of my time at Labyrinth, he and I had a lot of those interactions.  Though, to be honest, I was never really sure if he knew my name.  It didn't matter.  He was who he was, and I am who I am.  I was always in awe, and he was always gracious, kind, and brief.  I understood.

When I heard he died, I was angry before I was sad.  I was angry because it felt like some horrible prophecy fulfilled.  I was angry because, in some part of me, it made sense.  It was only when I started seeing his face and his name everywhere that my indignation was tempered by unexpected grief.  I thought of his partner, Mimi, my former boss, and his kids; there was no hiding from the gruesome tragedy of it all.  His death became relentlessly real, and I wasn't ready for it.

Now, I have no delusions that I existed fuzzily, if at all, on the periphery of his incredible life, but he was, I've since realized, at the center of mine.  And I think that was true of a lot of people.  To me, he was the epitome of what an artist should be; he was devoted to his work, devoted to his family, devoted to his friends, to his community; he didn't seek the limelight, he just wanted to be as good as he could possibly be.  Which, in his case, just happened to be the best.  He was, and is, an inspiration.  And I'll miss him.  Even though I didn't know him that well, I will miss him.  Because of what he stirred in me.  Because of the way he made me feel about being an artist.  Determined.  Proud.  He, to me, was the standard.  And I hope I can live up to, and learn from, his example.

This is for him:

In Memory of PSH
Art is
born, like the universe,
from emptiness,
from
from a space needing
to be filled; it is
something made,
like energy,
that cannot be unmade.

So, blessed be the artists,
for they are the wonderers,
the wanderers, the ones who leap
into the void, veins open, searching,
searching for something
to bring back, to teach, to all of us.
They are ones who ask our secret,
sacred questions, and we, reprieved,
apotheosy for their answering.

Yes, blessed be the artists
for the Earth shall inherit them.
Their work transcendent,
independent of life; art is,
like a word, like a number,
a construct, an idea,
true and inextinguishable,
endowed by its creator,
simply, to be.

Yet, when an artist dies,
(as we all, most pitifully, do)
attention must be paid.
Thanks must be given
as it is to a soldier, for bravery,
for valor, for fighting battles
on our behalf; we are indebted.
And so we mourn, selfishly perhaps,
made weaker by the loss.

But, in our grief, we must remember
the man, the woman, the person behind
the art; the father and the husband,
the brother and the son, PSH was
the center of a thousand orbits, each one
proud to feel his gravity.  I was one,
whether he knew it or not, I was one
who will remember, his face above all,
round and warm and bright and true.