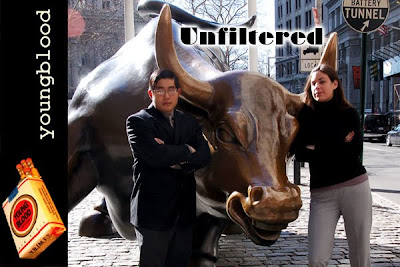 Catherine Murdoch, head of wealth management at one of the world's largest banks, has just been passed over for CEO, in favor of the charm-spewing Bill Enoch. Now, Catherine must choose whether to follow orders and engage in risky investing - or challenge her new boss head on. Wall Street, the economic meltdown, and the role of women in finance collide in this fast-paced drama about the dirty choices that got us where we are today.

microcrisis is a ridiculous comedy about the world's next financial crisis. The play centers on "microcredit", the Nobel Peace Prize-winning concept of providing Third World entrepreneurs with small charitable loans in the hopes of alleviating global povery. This play is about what happens when bankers exploit microcredit, lump the loans into complex financial instruments, and once again ravage the global economy. It's a hilarious laugh riot.

Tickets to either Unfiltered show are just $10!
To purchase, go to www.ensemblestudiotheatre.org or call 866-811-4111.
Posted by MisterMichaelLew at 9:30 AM 1 comment: