Last night Nora Ephron passed away. I don't know about other  female comedic writers out there, but I have felt really sad about this. I cried. I dreamed of death.

Nora Ephron has written tons of excellent movies such as "When Harry Met Sally," "Sleepless in Seattle," "Julie & Julia" and a personal favorite of mine, "Mixed Nuts." She was also a film director, a novelist, a journalist, an essayist and a playwright. You can read all about her credits all over the internet. But as an emerging playwright/screenwriter, I wanted to write about my experience as a puny fan of this great woman.

My friend who was in Love, Loss and What I Wore invited me to the opening night party because she knew I was a huge Nora Ephron fan. I got dressed that night thinking, "Be cool. You may not get to talk to her or if you do, she may not care you exist or give you a fake bitchy smile." I got to the party, greeted my friend, and spotted Nora Ephron. But I chose not to make a move until later or maybe not make a move at all. So I headed to the cocktail table. There were red drinks and purple drinks and I took a good look at all of them, wondering which would taste least like cough medicine. "What do you think these are?" I heard over my shoulder. I turned around and there was Nora Ephron asking me what the hell these cocktails were! I said something like, "I think some sort of cosmopolitan maybe." Then I told her I was there because of my friend. Then I told her I was a huge fan and grew up on her movie, "This is My Life" and Heartburn was one of my favorite books. I could see in her eyes she knew I was more than just a "When Harry Met Sally" fan. I was the real thing. Then, even better than being at a party with her and having her come up to talk to me, and having her even listen to what a gigantic fan I was, she said, "So what do you do?" And I told her about my plays and movies and the next thing she said was not "okay, bye" or "great meeting you" or "gotta go talk to other people now" but she actually said, "Let me know if I can help you." And I blushed, peed in my pants, did a cartwheel, flew for a few minutes, and then said, "Oh that's very nice. I'm sure you're very busy." And she said not "You're right. Bye." Or "Yeah but I don't want you writing anything nasty about me on the internet" but instead, "No, really."
And I got her email address and I actually sent her my screenplay Helping Yourself and she read it within a few days, and told me that I was funny and should keep writing. And I have been fulfilled in life ever since. 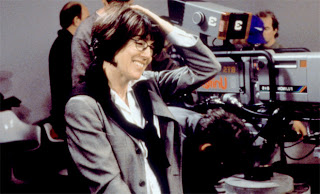 Many people know her as a fantastic funny writer and a strong woman. But I had the pleasure of seeing that she was also a generous woman. And though she inspired me with her writing since I was 8 years old or so, having her bother to talk to me and encourage me meant the most. And I hope to write as much wonderful, produced, high-grossing work as she did, but I also hope to make future ladies feel like they should keep on keeping on. Thank you Nora, for creating funny and moving entertainment and for making the punier of us feel like we deserve to be celebrated, too.

This is awesome, Emily. A wonderful tribute to a great lady.

Emily this made me really sniffly, in the best way. Love Nora, love you.