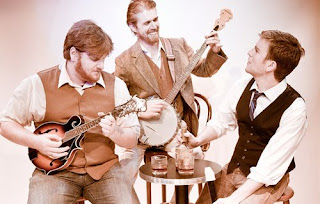 This is not just a plug for Great Dog Almighty which is playing at Ars Nova on November 2 at 8PM, but a plug for becoming a lyricist. GDA represents my first dip into the world of lyrics, and while I was something of a poet briefly in high school, this has been a new venture for me and one I recommend other playwrights take.

This dip started roughly a year ago when I had an incredibly boring office job, during which I would challenge myself to write little poems to stay awake. One of these poems described a lone survivor on a civil war battlefield observing the aftermath of deadly fray. My composer friend Nate--who had the same job as me--set it to music. Our friend John sang it. We had so much fun we did it a few more times, invited in a few more folks to join us, and suddenly a little civil war-themed bluegrass band was formed.

I'm not sure if writing lyrics helps your playwriting skills, but it's a pretty fun exercise in collaboration. Lyrics are only part of a song. They're an important part (sometimes), but they do only some of the work. The melody will also do part of the work, as will the soul of the singer who performs it. Then you've got the rest of the band--your fiddle player, your bass player, your backup singers--who add whole new dimensions and textures to the song.

Playwrights may appreciate this process. You know what I mean. You write your scenes, you hand them off, you watch others build sets for them or create props. You watch actors delve deep into what we've written, finding things you may or may not have been aware of. You watch a performance of your play and you see things that you wrote, but also things you didn't. You realize your script is only part of a play. An important part (sometimes), but that other elements are at work too, contributing and enhancing the scope of your vision. You realize this work takes a village, it takes a band... it takes more than just yourself.

And then perhaps you realize--as I did while listening to Great Dog Almighty last night--that this is why you do it.
Posted by Patrick Link at 10:56 AM