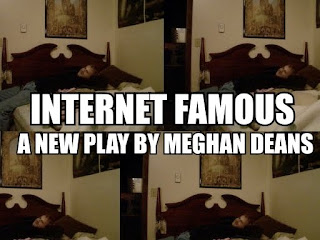 My Bloodworks play is called Internet Famous. Guess what! It is about the Internet. This is good for you, because probably you know something about the Internet, because you are on the Internet right now. Unless someone has printed this post out for you. Or unless it is the future and the Internet is obsolete and you are not even reading this, it's just so far in the future that you're just licking this up with your mind-tongue.
Gross. What the hell is a mind-tongue. Also what were we talking about?

So it's about the Internet, but more specifically it's about people who write and share fanfic on the Internet. What is fanfic! You might ask, and I would say, you know how sometimes you have a favorite television show and something happens on it and YOU HATE IT or you love it but you think it would be better if more of the characters were making out? Fanfic is the place to do that. Though fanfic existed pre-Internet, the Internet has given people a place to quickly share work and to form tightly-knit communities. These communities can be wonderful, supportive, creative places. They can also be mean, nasty places, full of politics and dramatic social stratifications. Sounds like a good thing to write a play about, right guys? RIGHT? 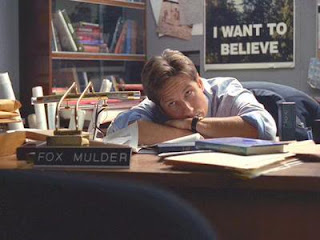 I've been in and around my share of Internet-based fan communities -- pro tip: call 'em "fandoms"! -- for about half my life. As a li'l Meghan, I was a devoted X-Files fan. My nerdery found a home at alt.tv.x-files, a Usenet newsgroup where folks shouted at each other about whether or not Mulder was really dead this time. (He never was.) I made friends, learned life lessons ("RTFM" has served me well in office culture), and yeah: I wrote some fanfic. Just a little. The first fic I wrote was a really terrible X-Files/ER crossover that got kinda meta at the end, with David Duchovny waking up from a near-death experience as Mulder at County General...only to find that he's at a charity softball match and he passed out after Noah Wyle hit him on the head with a softball! I don't think on purpose. But if there's enough demand maybe I could write a sequel.

"Imagine. Going through your whole life looking like that."

Anyway, most fanfic is better than mine was. Some of it is even really good, and very little of it involves Noah Wyle (sorry Noah. get yourself a cult scifi series and we'll talk.). And while it's still trendy to portray fandom communities as being full of headcases and nutjobs, a lot of completely sane, brilliant people participate in fandom. Also, a lot of headcases and nutjobs participate in fandom. Internet Famous is about the brilliant ones, and also it is about the nutjobs, and it is most of all what happens when they all get together in a room and drink.

I hope you come see it. I'd like that a lot. Here are some details.

Internet Famous
a reading of a play
by Meghan Deans

Labels: Bloodworks, Deans, Internet Famous, Maybe I'll Just Have All the Actors Read My Old Fanfic Instead, The X-Files

I'm constantly writing "Dynasty" and "Dallas" fanfic in my head.