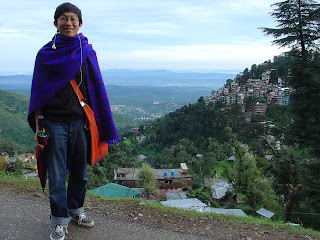 This is a picture of me, taken in the Himalayas during the summer of 2008, during my spiritual journey to the temple of His Holiness, the Dalai Lama. HEARTBREAK/INDIA, though, is not about religion, and it definitely wasn't a theme, or subject, I sought to write about when I first started writing this play.

HEARTBREAK/INDIA is a play I began writing, and failing to write, since 2005. The play was really an attempt to write about my frustrations finding a stable, romantic relationship. Failure after failure, the plays deteriorated into these never-ending dramas that really bored the shit out of me. One of them was called "A Fairytale: Full of Beautiful Meaning but No Practical Use" and it was a three-hour long, whiny, whiny play. Thanks Youngblood--for bearing with me. 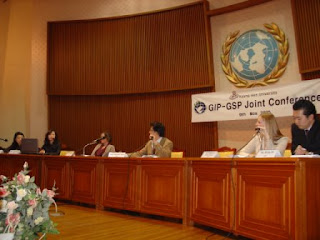 In 2007, I started rewriting the play during a workshop with Tim Crouch. I told him I was writing a play about a relationship I had had with a foreign, UN, diplomat in Korea while I was pursuing my MA in Peace and Global Governance. Tim asked me: "Do you know what you're doing?" and I said yes. I wrote a first act, called it "The Little Bitch Play" and then never wrote the second act.

The second act was never written, because a month later I was dumped right before Christmas and I went into the most horrible depression in the world. I experienced the worst winter in my life, was totally broke, and took teaching jobs left and right to keep myself distracted. Somehow, these two break-ups had blended themselves in my mind into this one, horrific experience and the core values I believed in went to the shitter. Peace and love had become impossible to believe in when everything just seemed to be going wrong. 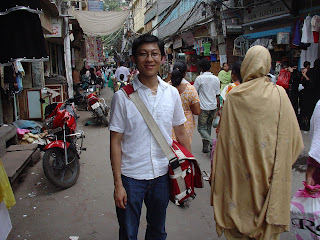 I knew I had to do something about this so I applied to a fellowship in India, went to New Delhi, and started writing again. I re-titled the play "The Problems of Dating Me" and using the work I had done in "The Little Bitch Play," I quickly rewrote the first act.

Then, I was stumped and didn't know what to do, so in some desperate attempt to find a story to tell, I started reading novels about spiritual journeys. Some of them, like Paulo Coelho's The Pilgrimage, were really about that, but I also read stuff like O 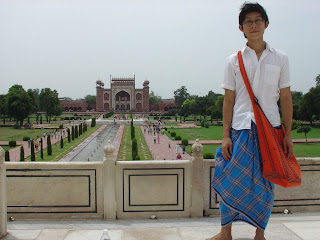 n the Road and Eat, Pray, Love to widen the scope of what I was reading.

During that time, I realized that His Holiness, the Dalai Lama, lived in exile in the Himalayas and when I checked out his website, I found out that he was holding a teaching for Korean Buddhist monks the following week. It was a sign! I took at 12-hour bus ride overnight to Dharamsala and found myself taking a teaching with the Dalai Lama for a week. I converted to Buddhism, which was a total shocker, and returned to New Delhi to finish the play. I called it "Unexpected Vows" and it SUCKED.

By this point, I should have given up and said to myself that this was never going to happen, but I started rewriting the play, trying to more honestly write the story I wanted to tell. This new version of the play, HEARTBREAK/INDIA, is hopefully the end of this weird, five year obsession with issues concerning peace and love. What remains on the page now is the closest approximation to what happened to me during this time. 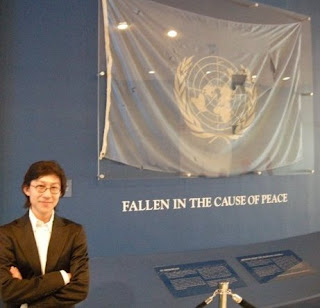