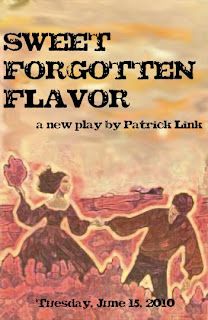 This play is a tribute to the old school. An ode to the drawing room play, to the Dickensian magistrates and potentates of yesteryear. To the servants, cobblers, and haberdashery boys. To the crinolines, bustles, and bonnets that made me--as a mere youth--first love the theatre.

I'm also fascinated by the world before photography. Hard to imagine, almost. Isn't it? Even when I close my eyes, I'm inundated with imagery--products, celebrities, facebook friends. Any image I want is only a click and a search away. But what if the only way to get an image was to have somebody draw it? What would you have drawn for you? If you could have anything. Really think about it. I did and I wrote a play about it.

Sweet Forgotten Flavor is about a portrait painter. He's a man of little means, but exceptional talent. A wealthy lawyer commissions our painter to do a portrait, but during their first painting session a careless proposal releases an unstoppable spring of sin, scandal, and sensuality.

I love it when you write a blog post. I hear your voice reading it just like a monologue.

Thanks, Monica! I'll shoot you the script after we read.

Josh, I feel the same way about your posts. We need to vlog!