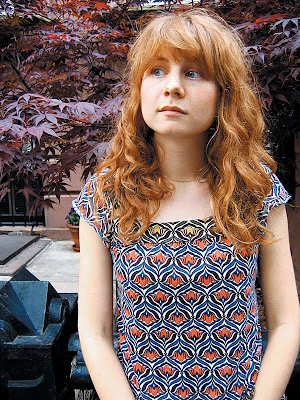 Real talk express: Annie is a Youngblood alum, so hopefully it's not too uncouth to post this. Let me just state the obvious right up front: straight dudes in theater LOVE Annie Baker. Like, a lot. I don't know Annie personally, but she looks just like this girl named Brenna who sat next to me in A.P. English.

Arty dudes loved Brenna too. She dated Gabe who was one of the hottest arty, rocker boys in school. She was soft and kind of quiet, which belied a ferocious intelligence. Because she was so smart she was hard to get close too, which undoubtedly drove boys crazy. Few people got to know how hilarious she was. Most of those boys didn't know that Brenna had better taste in music and books than they did either. But she did. Brenna went on to become the valedictorian and Gabe went on to... well, who knows? He was never really good enough for her anyway.

I'm into dudes, but even I can admit that Annie is hot. Look how pretty her hair is! Also, she's always wearing cute stuff in press photos. I mean, it probably doesn't hurt her cute quotient that she's really talented or whatever. I guess she's written a couple of plays that people kind of liked or something? But who cares about dumb old plays? Something tells me that Annie, like Brenna, makes incredible mixed tapes. I wonder if she was ever into Sonic Youth.

At any rate, I'm certain- CERTAIN- that there must be heart broken arty boys all over New York because of Annie and to them I dedicate Jackson Browne's "Somebody's Baby."

Every time I see a picture of Annie Baker I wonder how it is that she's a playwright and not the keyboardist for an indie band.