Alibar: NOTES FROM THE ROAD

Lucy Alibar has been MIA from Youngblood & NYC lately... Here she is, filling us in:

I am adapting a play that I wrote into a movie for the Sundance Film Lab, which will be in June, in Utah. We spent a part of January developing it at the screenwriter's lab...they pair you up with mentors who can steer you through the specific problem spots of your script. Since ours deals a lot with magic, and myth, and ferocious aurochs, Michael Goldenberg was an amazing help. He wrote the last Harry Potter movie, and he has really helped us maintain those very delicate, nuanced relationships in the backdrop of all the apocolypse craziness.

…[T]his go-around [in June] is about bringing the whole thing together, from the script to the music to the cinematography. My director, Benh Zeitlin, and I will be developing the script with actors, workshopping and shooting scenes, and also working on music with the Composers Lab. It's gonna be more fun than a tub of puppies!

Benh's last movie, "Glory at Sea", (it's the myth of Orpheus set in New Orleans) got a lot of well-deserved press and awards. I cry every time I watch that movie, it's totally brilliant. And the music, which Benh also composed, got picked up by the Obama campaign for several of their ads. So Sundance contacted him about developing his first feature under their guidance--because that's what they're so great about, is giving you all of these brilliant people and resources so that your work can be the most fully realized.

The movie is called "Beasts of the Southern Wild," and it's a coming-of-age story about a little girl in Louisiana. There are other things going on--namely, a global apocalypse--but that's essentially the story.

It's based on a play I wrote that's based on my own family in sweet home Lower Alabama, but Benh, my director, is obsessed with this community on Isle de Jean Charles, in southern Louisiana, which is literally sinking because of coastal erosion and global warming. It's this gorgeous, very unique community that will not be here in fifty years. And we were both so compelled by that, and we wanted that to be this little girl's community.

Isle de Jean Charles, in southern Louisiana that is literally sinking , the setting of Lucy's screenplay, BEASTS OF THE SOUTHERN WILD 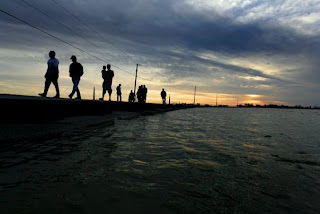 I will be back in the city on Wednesday, and have two more deadlines after that, for the casting people and then the final deadline for the lab. And then in May I'm sharing an evening with Erin Markey, Erin Searche-Welles, and Paige Collette at University Settlement, where I'll be a playwright again, and then I go to Utah.
Posted by Kel Haney at 12:58 AM