Conkel: NOTES FROM THE ROAD

Joshua Conkel:
I flew to Chica 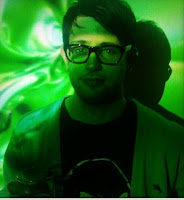 go over the weekend to attend The Pavement Group's workshop of my new full-length play, MilkMilkLemonade. I'd never been to Chicago except for once when I was a little kid, but that was just a layover at O' Hare so it didn't really count. As luck would have it, my best friend Jenny moved to Chicago six months ago so I already had a place to stay. I don't know if you've heard this, but Jenny's neighborhood Wicker Park, is really awesome. It turns out a lot of people from my undergrad years at Cornish College of the Arts live in Chicago and so the whole weekend turned into a whirlwind of beer, theater, and steak sandwiches. I never left Wicker Park once and found it to be very much like my beloved Brooklyn. Much fun was had by all and I can tell you I've never looked as gorgeous as I looked last night on the plane home (note sarcasm).
The Pavement Group is a theater company created by former and current employees of Steppenwolf (where I got to rehearse and, by the way, and do you know they have a stunning old fashioned theater inside of their theater they they never use?) Artistic Director David Perez and his crew were so kind and accommodating to me. The cast was impressive and hilarious and really, really sweet. The show itself was at the Elegant Mr. Gallery, a loft space so-named because it's located above Elegant Mr. Mattress on Milwaukee Avenue.
The show was packed with cute hipsters, including the lovely Joy Meads, Literary Manager of the Steppenwolf Theatre Company. I feel very lucky to have gotten the chance to speak with her. She was so sweet and unpretentious and I walked away feeling like my faith in the American theater was somewhat renewed. The audience laughed a lot at my reading, but I couldn't tell if I lost people at the end. Things get really serious right at the end of the play and now I'm afraid that it's too manipulative or something. I also realized the play doesn't take place in Washington State like I thought it did, so I had to rewrite all of that before the performance on Saturday without the aid of script formatting software. My computer crashed a week ago, so rewriting has become a tedious nightmare.
I'm looking forward to working more with The Pavement Group in the future (I hope). Like Youngblood, this is a group of whip smart young theater artists and we would all be lucky to get our work produced there. 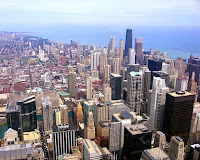 Chicago's skyline. Rumor has it, Joshua took this shot as he was recovering on the plane ride home to NYC...
Posted by Kel Haney at 11:48 PM