Anna Moench, chatting about the piece she is developing via Bloodworks:

My Bloodworks play is a new project titled GREAT EASTERN, a reference to The Great Eastern Brood of periodical cicadas that emerges en masse every 17 years in certai

n regions of the Eastern US. For a few intense weeks, cities, suburbs, and countrysides are overrun with millions of cicadas flying clumsily through the air, blanketing every surface, calling to each other, mating, and dying. This spectacle is an example of predator satiation, a survival tactic of the defenseless that floods predators with such an overabundance of prey that some of the hunted are bound to survive. 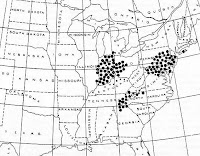 I was born and raised in Baltimore, Maryland, in the heart of The Great Eastern Brood's territory. I have been home for both emergences that have occurred during my lifetime, and each has happened to coincide with a formative period for me. One of my very first memories is from the 1987 emergence, when I rode a tricycle over the thousands of dead and dying cicadas that littered our street to hear them crunch beneath my wheels. The sound was a welcome change from the deafening mating calls that had droned on incessantly for weeks. Seventeen years later it was 2004 and I was home from college for the summer. I was an Adult, I was head over heels in love, and I was pretty certain that I had my entire life figured out. I thought deep thoughts about the cicadas' phoenix-like cycle of rebirth while cleaning splattered cicadas off the windshield of my parents' Corolla with an ice scraper.

Perhaps because these emergences bookend the period between my earliest memories of personhood and my earliest conceptions of adulthood, I can't help but link cicadas with adolescence. When a cicada turns 17 it tunnels out of the ground for the first time in its life, puts on a pair of brand new wings, flies around aimlessly, listens to really loud music, and is entirely obsessed with sex. When we humans turn 17, many of us leave home and embark on a similar journey. Out in the world, cicadas fall prey to a variety of dangers in the forms of birds, snakes, squirrels, and Corollas. We too have predators to face, especially when we're new to adulthood, when our exoskeletons are still soft. The characters in GREAT EASTERN hunt and are hunted by each other, shed old secrets to grow new wings, and sweat out a hot and humid summer in Baltimore as the drone of cicada songs crescendos around them.