Michael Lew, one of the five YBer with plays in Sunday's Final Brunch of the Season (do you have your reservation, yet?), offers some insight to his piece: 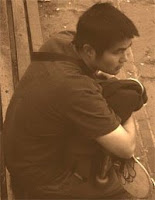 I wanted to examine the idea of victory through a play about a young striver trying to break into the radio business (being a DJ), so that there's the conflicting victory of succeeding in a medium that - like the theater - is aging and perhaps on its way out.

I stupidly signed up to do the brunch during the same week that I have pages due for the group. I'm working on a full-length for Bloodworks and am trying to juggle the two projects.

In addition to being about Victory, this brunch piece will be an experiment in syncing my plays up to pop music. There's a section of the play set to a rap song. A couple years ago I did a brunch play called Pirate Tom Goes a'Courtin - for the Pirate Brunch - and the whole thing roughly synced up to sections of Queen's "I Want to Break Free." It was kind of this beautiful disaster and that's what I'm aiming for here, albeit hopefully pulled off with a bit more finesse this time.
Posted by Kel Haney at 1:01 PM