Here's a little background on a couple of the Hometown Brunch Playwrights: 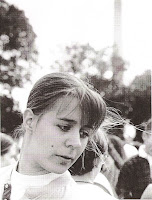 Dorothy Fortenberry, hailing from Washington, D.C. set HOME RULE in the local eatery, Ben’s Chili Bowl, where President Obama infamously made an appearance on January 10th & ordered a ‘chili half smoke’(see the YouTube footage). To further explore Obama's newfound prescence in Washington, D.C, check out this NY Times article, which Dorothy read while drafting the piece.

Dorothy, in front of the Washington Monument 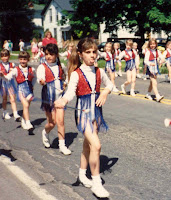 s HOME GAMES focuses on former high school sweethearts in the small town of Dyden, in upstate New York. A chance hearing of Bon Jovi's "She Don't Know Me" sparks a revisiting the decisions they made surrounding Homecoming '88. Here are a couple of pictures of Erica, as 'a small town kid, doing small town kid things,' circa 1988 (left: Erica, at some sort of autumnal event; right: Erica in a parade (and sticking her tongue out!)