Jesse Cameron Alick, answering a few Youngblog's questions regarding his Bloodworks piece, NO POEM NO SONG:
YB:What are you working on? Something you’ve been developing a while? Something that you are revising/revisiting? Something entirely new?
JCA: I'm working on a play that I started a couple years ago called NO POEM NO SONG - it's been collecting dust for years however, and then in January after a trip to Grenada (my ancestral homeland) I injected new life into the play. And it's been rolling out of control since!

YB: what is your piece exploring? 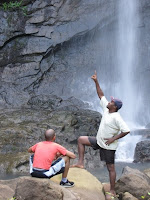 JCA: In a nutshell, NO POEM NO SONG is about the relationship between West Indian folklore and East Indian religion. I use both traditions to create a pantheon and then use the gods and spirits of the pantheon to tell the tale of the end of the world. It's a story about myth and about freedom.
Jesse (seated), with his uncle in Grenada
YB: Why are you interesting in working on this piece RIGHT NOW?
JCA: This piece is another step in my journey of exploring the religions of the world through theatrical means. A lot of people will tell you the wack things that religions are responsible for - but I'd argue that it's their followers, not the actual religions that are wack. I'm a big believer in belief...
YB: What kind of inspiration is making this piece happen for you?
JCA: As I mentioned to Kern [as in Jon Kern, fellow YBer] the other night as we were riding the train home - I write in order to find a way to be closer to the Almighty. I don't know how that sounds, but its the truth, so there ya go! The idea behind a lot of my work is to attempt to understand the unknowable.
YB:How is the writing going? Is it developing in similar/different ways than your usual writing?
JCA: It's going...okay. I mean GOOD - but in a terrifying way. I'm trying a new method of development this time around - I'm having a sort of "pre-reading" with meat and bones theater company on Monday April 27th, then doing another re-write, then doing the YB [Bloodworks] reading in June. My hope is that by that time I will have ironed out the wrinkles in the worlds I'm creating...
YB: What are you hoping to gain out of the reading? Any particular questions you are trying to get answered?
JCA: I wanna see if it works. I'm wondering if the audience will "get" what I'm trying to do. I hope so! I really believe in this play and I'm enjoying the hell out of shaping and watching it's life.
One more thing: My little brother Kyle wrote a song based on a character that's in my play, LaDiablesse - here is the link to his bands website, where the song is.
Posted by Kel Haney at 12:55 PM