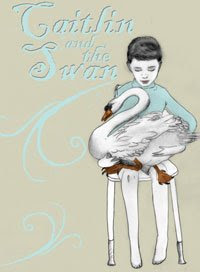 Two Youngblood playwrights, Dorothy Fortenberry and Joshua Conkel, are currently collaborating on CAITLIN AND THE SWAN, starting performances this Thursday. Dorothy wrote the piece and Joshua is directing—it’s being produced by The Management, where Joshua serves as Artistic Director. Since the collaboration grew out of Youngblood, I asked them to do a virtual interview with me… ~Kel

KH: Can you pinpoint what drew you to one another as collaborators?

JC: Dorothy and I didn't know each other prior to Youngblood and I have to admit I was a little intimidated by Dorothy's pedigree. She seemed so easy in herself and confident to me, so at first I probably thought she was way out of my league as a collaborator. I hate to admit that when I e-mailed Dorothy about producing the play a part of me expected a "thank, but no thanks" response. (Maybe I have self-esteem issues?) Luckily, Dorothy is an incredibly generous and patient person and writer and this all turned out for the best. There isn't a pretentious bone in her whole body, which is one the most important things to me in terms of collaborating with somebody.

DF: The first thing I remember about Josh was his piece in Asking for Trouble - Up With (Some) People. It was hilarious and polished and surprising, and I thought,"Wow, Joshua Conkel, he's really good at this. He's probably been in Youngblood for forever." And then I Iearned that he was a newbie just like me. As for what drew us together as collaborators, saying "I like your play and want to produce it" is a pretty solid way to get me to think that you're a genius. I didn't know Josh's work as a director, but by then I knew several of his plays and was sure he had a strong sense of the theatrical, the funny, and then strange - so I felt I would be in good hands (and I am!)

KH: Am I right to assume Dorothy shared CAITLIN AND THE SWAN in Youngblood Playwrights Group?

DF: Yes, and because I didn't do an Asking for Trouble piece it was the first thing I ever shared with Youngblood. I remember thinking, "Well, they're either going to love it or hate it . . ." and I think folks did both.

JC: Dorothy brought Caitlin and the Swan to be read at Youngblood's winter retreat in the Poconos and I completely flipped out by its conceits and cheeky way of dealing with heavy subject matter, which is something that The Management likes in a play... a lot. When i got back to the city I met up with the girls from The Management and completely geeked out. "Oh my god, you have to hear this play about women who fuck animals!" They of course looked at me like I was a crazy person... until they read it. Dorothy submitted the play to our reading series but it just so happened we hadn't picked out a mainstage show for the Spring even though we already had the space booked. It was all a matter of timing, I suppose.

KH: Dorothy, could you give us a little background on the piece itself?

DF: The play was written as part of a bake-off workshop with Paula Vogel and the Yale School of Drama playwrights. We were given the theme of "Leda and the Swan," and a bunch of Swan-related art (Elizabeth Egloff's play "The Swan," the Yeats poem, paintings . . .) I started writing it in July, and the biggest theme in its development was surprise. I kept being shocked by what characters did -- all the way up to the end, I was thinking "Really? They're going to do THAT?" Sometimes when I write a play I have a clear sense of where I think it's going, and this one really blew my mind. Much more recently, I realized that this play is actually kind of a continuation of a play I wrote many years ago called All of the Above. That's a play about a group of women roommates on the night before they graduate from a very fancy, very competitive university. I wrote that play when I was 23, and all I could think about was the end of school. Although the characters are different in the two plays, in some ways Caitlin and the Swan picks up the story five years later and asks, "So what happens to these girls? Did they get what they wanted?"

KH: Josh, what drew you to the piece as Artistic Director of The Management?

JC:I was drawn to the play immediately. I'd been wanting The Management to do a play about gender and sexuality for a long time and just couldn't find anything that grabbed me. As a queer person the issues that Caitlin and the Swan deals in are my every day. I wake up with them and go to sleep with them, so sometimes it bothers me that nobody is really writing about them in new ways. Particularly in new ways that are actually, you know... entertaining… [A]s the Artistic Director of The Management, I helped develop the mission statement that seeks to present contemporary plays that explore life in America and are accessible, theatrical, and not pretentious. Caitlin and the Swan is a natural fit.

KH: Josh, I'm curious about your collaborative process as a director of a new piece--how is it affected by being a playwright yourself?

JC: My process as a director is incredibly collaborative. I take everybody's input, and I mean everybody's. I think this is how people learn to create art when there are very limited resources available to them. I'm willing to try anything and if it doesn't work, I just toss it and try something else. In fact, the whole reason I began directing was because there was nobody to direct the plays I was writing. I come from a very, very DIY place as an artist and at this point, ten years into theater making, directing and writing are two sides of the same coin for me. I hate it when people say playwrights shouldn't direct their own work. I don't always have to direct my stuff, but it just so happens I'm really good at it because at some point I had to be.

KH: Dorothy, can you talk a little about your experience having the director of CAITLIN AND THE SWAN as a playwrighting peer in Youngblood?

KH: Can you two talk a bit about the casting? Have either of you worked with any of the actors before?

JC: Casting the play nearly gave me an ulcer. I hate, hate, hate auditioning actors and avoid it at all costs. In fact, this was the first time we've held auditions in years because I prefer to cast or in many cases write roles specifically for actors I know. I know that auditions are a part of professional theater, but a big part of me still feels like I'm a little kid at the pet store. I want to take them all home with me! That said, Marguerite French (Caitlin) is a member of The Management. Jake Aron and Teresa Stephenson came to us through Ensemble Studio Theatre. Brian Robert Burns (Doug) went to Yale with Dorothy and Shetal Shah (Priya) and I have many, many mutual friends. Elliott Reiland (Pig/Swan) was really hard to find because we needed a beautiful male dancer type and I had zero dance connections except for one: our choreographer Croft Vaughn, who totally delivered. Thanks, Croft!

KH: Josh, could you fill us in a bit on The Management?

JC: Our mission: The Management creates a haven for a community of artists and patrons to experience relevant, moving, unpretentious, aesthetically and financially accessible theater. We are known for our dark whimsy and critical exposés on American culture, while building rock-solid, visceral entertainment. I went to Cornish College of the Arts with Courtney Sale, a founding member and my Co-Artistic Director. I joined The Management on their second show, Naomi Iizuka's Aloha, Say the Pretty Girls, in which I took a rare acting turn. I played Myrna, a passive aggressive female school teacher who doles out pearls of wisdom. Type casting, obviously! I directed a show and then when Courtney Sale left town for a year I became The Artistic Director pretty much out of necessity. When she came back we became Co- Artistic Directors. Caitlin and the Swan is our third show as a Resident Company of Horse Trade, and we feel so very lucky. Erez Ziv and the rest of the staff are incredibly nurturing and manage an incredible workload juggling the companies. I heart them.